I was invited to try out the Nikon Df for a couple of weeks to see what I think about it. I knew it received a lot of backlash from the online community when it was released, most thought it was all form and no function. But there was one thing that really piqued my interest in this camera… it wasn’t the back-to-basics retro body or the ‘pure photography’ mantra.. it was the D4 sensor in a smaller more affordable package. Immediately, I knew there was only one way that I really wanted to test the camera – shooting low light portraits. 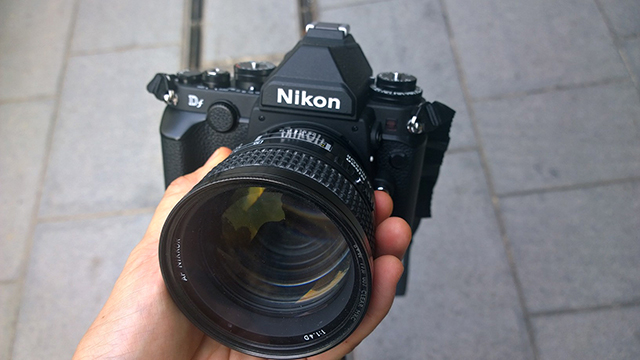 The plan was to walk around the streets, spot a face that stands out, ask permission to shoot, and click – pretty much what I’ve always done on my Portraits of Strangers project … only this time I’m doing it after dark.

Within the first few hours of using the Df, I was starting to get accustomed with its body and design. It was actually smaller than I expected, noticeably less bulky than the DSLRs I often use. I used to be a gadget geek, so having these knobs and dials that give me an immediate view of the settings was a welcome change. It’s ironic that this felt more streamlined than the LCD display readings.. but that’s just me. However, the fact that I have to press a button to rotate certain dials leaves much to be desired. But as I continued using the camera, this mechanism didn’t really bother me much.

Now the highlight for the Nikon Df for me is its low light capabilities. And within the first few clicks, I knew immediately it does not disappoint. I set the aperture to f1.4 and shutter speed either 1/125 or 1/160.. and the ISO to Auto. From one portrait to another, at varying light conditions, the ISO fluctuated between 1600 to 5600. And as expected, even at the very high 5600 ISO, the image looked great – image noise still at a minimum. Sure, if you look close enough, you will see some noise, but it does not distract from the image you’ve created. The portrait remains completely usable in my book. The sensor has lived up to it’s reputation.

I do have one gripe, though. I kept pushing the camera to tricky low light situations.. but the lower the light, the harder it was for the Df to focus. In almost all of the portraits, it took around 10 to 12 seconds for the camera to hunt and nail the focus.. it can be quite awkward for the stranger to look at the lens that long. On normal lighting situations, the camera usually gets the focus in a second, and I get all the frames I need well within 10.

Shooting portraits at night is quite a new experience for me. There were noticeably a lot more interesting strangers to take portraits of. In a couple of hours that my friend Jon and I walked around in Orchard at night, we got more interesting portraits then I did walking around for 3 afternoons. The lighting at night is quite tricky, as I have to anticipate light coming from the shop facades, from the street lamps, from the car headlights, etc. But more often than not, you are guaranteed with a more colorful and atmospheric portrait – provided your camera is able to catch up with you. In these situations, I find that the more you push the Df, the more it shines.

Overall, having this camera is quite liberating, really. When I’m faced with low light while shooting, I can just say “ditch the flash, bring it on.”

Big thanks to Jon for the company while hunting for strangers. Big big thanks to all the strangers who said yes to the portrait.

261 Thoughts on Shooting Low Light Portraits with the Nikon Df