'Your camera takes great photos.'
The Street is Everyone's Catwalk
bad weather, Keeper of the Month, Personal Project May 18, 2010
Share

I’ve always been fond of shooting in the rain since it always has this great potential to bring out good moments in bad weather. Of course, it also has the potential to ruin your gear – but that’s a risk I’ve been taking, and I think it’s been paying off so far. 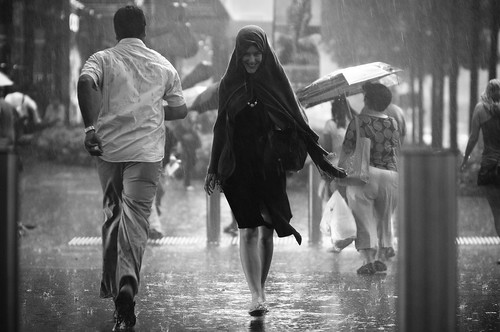 In this shot, I was standing in the middle of one of the heaviest rain I’ve shot on. As always, I was drenched from waist down and I kept my camera as close to the umbrella as possible. I’ve been waiting and shooting for about 30 minutes shooting here and there, but I haven’t really seen anything peculiar… until I saw a woman from afar wrapped with a shawl walking gracefully towards my side of the street. She just stood out from all the others who were equally rushing to shelter. It’s one of those moments when I thought “I HAVE to photograph her.”

I positioned myself in her path, crouched down, and took a series of shots until she walked past me. Later when I reviewed the shots, it was then that I realized she was smiling! She probably noticed me taking her picture. Or maybe she just really loved the summer rain. Maybe both… I’m not sure. But I knew I had a keeper.