One of the reasons I love shooting in Orchard Road is that it’s teeming with good-looking people frequently walking around, almost strutting… especially on the weekends. Even with relatively modest getups, the air of confidence is often noticeable from their head-turning allure down to their subtle swagger. Early on in my candid shooting exploits, it was this crowd that I wanted to capture.

I tried out a number of different ways on how to do this. With no style in mind, I would just haphazardly shoot strangers at any distance and with careless framing. Then after a LOT of mediocre shots, I came up with a few keepers which I really liked. I decided to replicate the style and stick with it — I would shoot subjects at front-view, full-body in frame, and at waist-level perspective. And if I’m lucky, I wait until available light shines on the subject. Their inherent style was already enough to isolate them from their surroundings, but the light definitely helps to make the shot a little more dramatic.

So weekend after weekend, I would walk around Orchard Road until I see a good spot with good light and good people traffic. The wait was hard, but spotting the right subject was easy – they would just so naturally stand out of the crowd and almost demand attention. I imagined myself a paparazzi taking fashion photographs of beautiful people walking nonchalantly in the streets. These are some of my favorites:

Blue angel
I camped in this spot for its soft light that shined through the trees from the overcast sky. I was crouched down looking at my camera’s preview screen, reviewing the mediocre shots I’ve gotten so far. It’s been almost 2 hours, and no ‘keepers’ yet. Suddenly when I looked up, I saw her right in front of me… I panicked and hurriedly pointed my cam and fired a couple of shots. The shot was worth the wait. The soft light complemented her subtle elegance. She’s an angel in a blue dress. 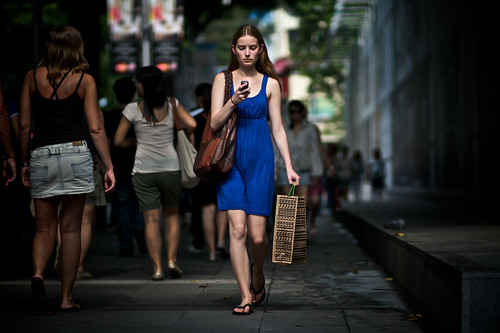 Urban warrior
When I saw this guy coming my way, I hesitated a bit. This guy can beat the crap out of me. But I took the risk and took the shot. Time slowed down when he continued walking towards me… then past me. Whew. I reviewed the shot, smiled and thought, “Yes.” The light shined strongly on him, producing harsh shadows that complemented his brusque stature. (Thanks to Billy Gomez for the title.) 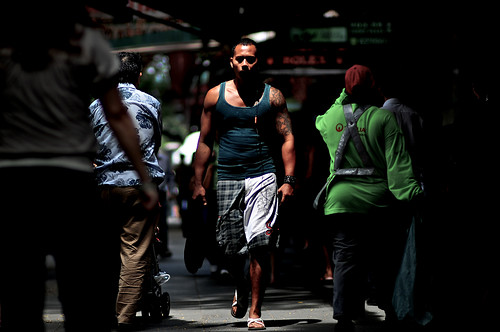 Mango girl
I was looking intently into this spot with good light, waiting for people to pass by it. When i looked back, I saw this girl walking quickly in my direction. I swung my camera around, took a few shots, and swung back. The light wasn’t ideal because it was shining from behind her. But her allure, I believe, was enough to make the shot a keeper. 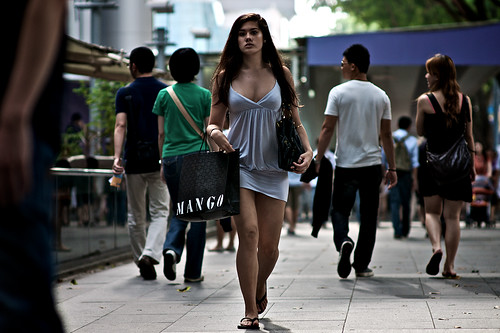 Police cuties
I doubt that they are actual police officers… they’re most probably models in cop costumes. A lot of my friends wished they were the real deal, though :) 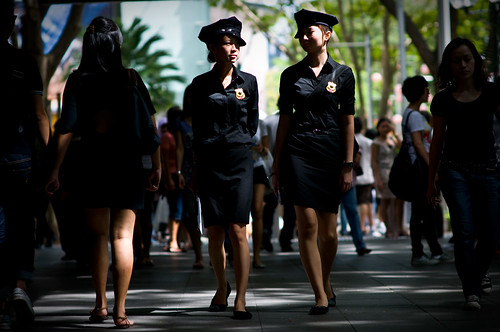 Top model
This girl just has ‘star’ written all over her. She’s tall, very stylish, and her walk was almost a strut.. yet she looked so natural. People who saw this shot recognized her, saying she was Sheila Sim, one of Singapore’s top model. Aesthetically though, the shot could’ve been better. I wish the light was softer on her, like the light on the ‘Blue angel’ shot. But then that’s how it is when shooting in the streets, not all elements cooperate with you. You have to make do with what’s there. 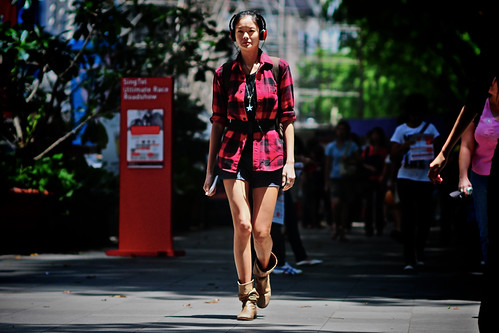 Biker chick
Rarely will you see a head-turner lug along a big motorcycle helmet while walking in the street. This girl was cool in every sense of the word. Even more rarely do I unknowingly photograph the same stranger twice in different occasions. Months later after taking this shot, I find out through Facebook that she was also in one of my candid street portraits that I photographed later. This is her up close. 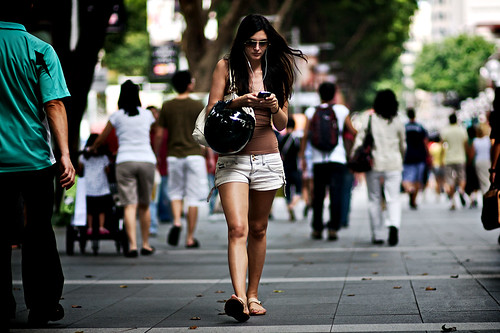 Being the premier shopping and entertainment hub of Singapore, Orchard Road is commonly frequented by locals and tourists alike. It’s easy to spot beautiful people walking around the street, cool and comely in their very own subtle ways. In a place like this, anyone can be a model by their own right. A street like Orchard is everyone’s catwalk.

A fellow photography hobbyist happened to spot me while I was working on this series. He discretely took my photo and later emailed me asking if it was me. This was the first time I saw a candid photo of myself while shooting in the streets. Thanks, Erwin :)

I would sometimes see people curiously staring at me as they pass by, probably wondering what I was doing crouched down in the middle of the street. I didn’t let it bother me, though – I was busy waiting and shooting. A lot of people ask me why I crouch down when shooting full body shots… well, the waist-level perspective is just different than a shot taken standing up. You see more of the horizon, less of the ground, and it’s just.. well, different… better in my opinion :)

104 Thoughts on The Street is Everyone’s Catwalk