A few days ago, I got an email from friend and blogger David Lee Tong saying someone just accused me of photo theft! On the comments section of his blog where he feature me in the past, this guy claimed I stole his friend’s photo – that of 2 girls running barefoot in the rain. He further stated that his friend has the original raw file to prove it, ending with the words “danny is a copycat.”

I was shocked beyond belief. 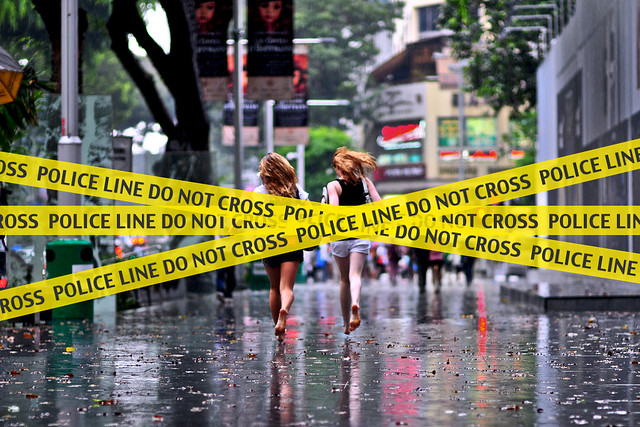 A million thoughts ran through my head. Who is doing this and why? How far are they willing to go with this accusation? How did they get a hold of the RAW file? How will this affect my cred as a photographer? I’ve worked 3 years to create a folio that I can be at least proud of… and the last thing I needed was a false allegation like this. Needless to say, I was an emotional mess.

But I gathered myself and started to plan how to handle this intelligently. I knew that the burden of proof lay on the accuser. When I challenged him on this, the best he could do was say “I know who took it, i know when and where it was taken… i know what was the “event” in Orchard on that day.. Forgodsake this photo is saved on two PCs in my home! i even had it as my office PC wallpaper during that time! It’s on my facebook page, my friendster page.. all because i love this shot which was taken by someone I know very well.” I was amazed how he seemed to really believe what he was saying.

I knew this wasn’t proof enough, so I gathered my own proof that I could slap in their faces. The photo in question was taken from a series of consecutive frames. As you can see below, the marked frame was the photo I went with. These are unprocessed and cropped for a closer look. 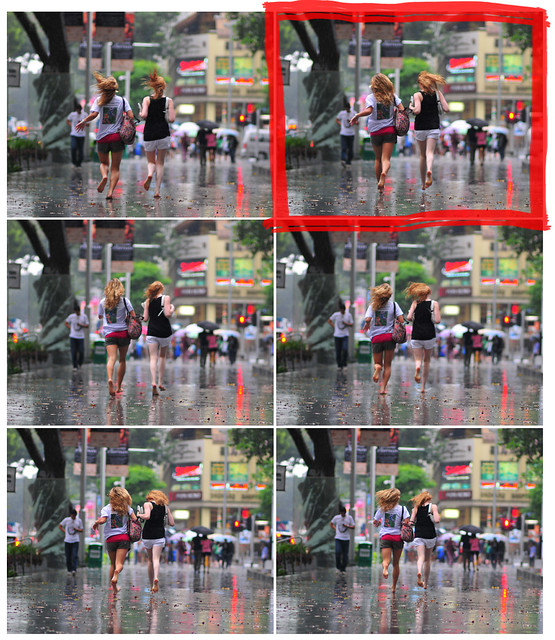 Even if they had the RAW file, I highly doubt they had these ‘before and after’ frames because I’ve never released this anywhere on the net before. When I posted this as my proof, the accuser lay silent.

Still restless, I needed to know who these guys were and get proper closure to the issue. Otherwise, it could still be a disaster waiting to happen. The accuser claims his friend took the shot. So his friend probably has it somewhere up on the net. I put on my thinking cap in search of my stolen photo. Using the accuser’s semi-pseudonym as a starting point, I googled my way from one Flickr site to another, surfing through blogs, portfolio sites, and Facebook pages. In a matter of minutes, I’ve made a game-changing discovery. I eventually honed in on one of the accuser’s friends, who happened to be a photography hobbyist. While quickly scanning through her Facebook page, I came across a peculiar album. It was named… wait for it… “stolen shots!”

I thought: wouldn’t it be funny if I uncovered my photo in THIS album? 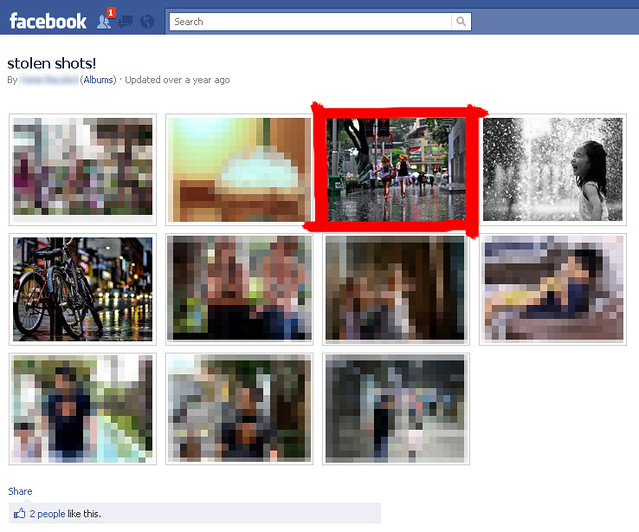 In addition to her Facebook page, the suspect also posted the photo on her portfolio site in the Aminus3 online community. In both sites, she masqueraded my photo as one of her own, receiving comments and praises for MY WORK. But wait… there’s more. With the beauty of Google and Tineye, and the acumen of David and my girlfriend Kathleen, we’ve further uncovered that 2 other photos in the album were stolen as well, from 2 different Flickr accounts! We’ve found a pattern. The perpetrator is busted.

I sent her a message to stop claiming the photo as hers because “you know as well as I do that you DID NOT take that photograph.” She responded back saying she actually took that photograph… that we probably captured the same shot at the same time. I shook my head in disbelief. How can 2 people take the exact same shot at the exact same time… and process it exactly the same way?? I continued to convince her to come clean so we can end this dispute. During this time, she deleted her “stolen shots!” album in Facebook as well as her portfolio site in Animus3. Good thing I took screenshots of everything… just for safe-keeping :)

Eventually, she came clean and issued a public apology.

In the end, it was a simple case of a girl wanting to impress her peers by nonchalantly stealing other people’s work… and the boy fighting for the girl’s rights without knowing any better. It was an exhausting couple of days for me. Somebody stole my photo and called me a copycat. What a weird experience.

Throughout this ordeal, I’m reminded of a couple of things:

1) Never delete your RAW files… even the crappy ones.
2) Google is your best friend.
3) Taking credit for other people’s work will never work out for you.

74 Thoughts on In Search of the Stolen Shot