I was recently interviewed by SlashMaraud, a blog based in Boston. One of the questions was “What are some unwritten rules of street photography according to Danny Santos?” Well, my answers were really more like tips than rules, and they’re not according to me but more like stuff that you will just learn eventually the longer you shoot. I decided to share my answers here and expand further. There are a lot more useful tips you can find online, but I believe these 5 tips is a good place to start with. So here goes…

#1. Perfect photographic moments in the streets come only once in a blue moon… but when it comes to you, it’s worth the wait. So have the patience of a saint.
I remember one weekend when I was shooting for about 2 hours with no single decent shot. I was tired, demoralized, and about to call it a day when suddenly this blue angel showed up in the middle of the crowd, walking almost aimlessly while texting in her mobile. This one shot made my day. It was enough to quench my photographic thirst for the rest of the week. 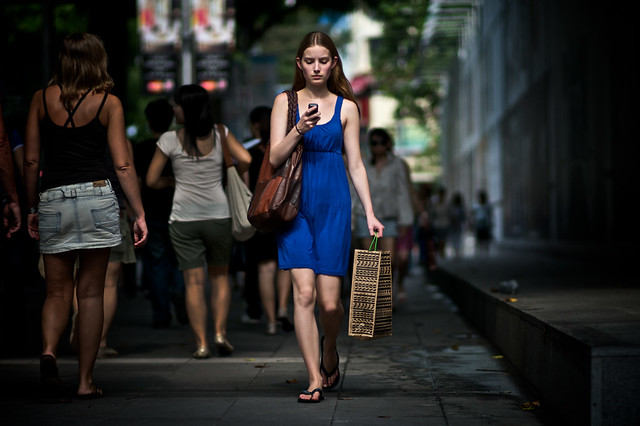 There were times where I’d go for 3 to 4 hours with no good shot to show for. I used to get so frustrated about it with fist up in the air, but nowadays I know that’s how it is… sometimes that’s what it takes for you to get that “keeper”.

#2. To capture that truly unexpected moment, sometimes you have to be unexpected yourself. Be discreet by blending in the crowd.
Try not to stick out like a sore thumb by wearing conspicuously bright clothes or constantly having your camera right in your face. Relax, put your camera down, and be an invisible observant by being just one of the casual street walkers. Raise your camera only when you’re a second away from taking that candid shot. Take a few clicks, then put it down again.

Some street shooters push the envelope by being so obvious to their victim subject so as to provoke a reaction towards getting photographed. That’s also a way to get that keeper shot if you’ve got the balls for it. Bruce Gilden is a good example of a photographer with balls of steel.

#3. Don’t hesitate, just shoot… in fact, shoot like crazy.
Great street photographers like Garry Winogrand and Trent Parke were very trigger-happy shooters. Winogrand could finish a roll of 36-exposure film just by walking from one block to another. He was able to publish 6 books in his lifetime. On his untimely death, he left behind 2,500 undeveloped rolls of film, and an additional 6,500 rolls that developed but not yet previewed – over 300,000 photos were undeveloped in total. 3 more books were published after that.

Trent Parke once said “You shoot a lot of shit and you’re bound to come up with a few good ones.” And indeed he shot a whole lot… and got way more than a few keepers.

Learn from them. I remember one night I shot like crazy while walking in the pedestrian lane in Orchard over and over again, trying to capture a good silhouette shot from the headlights of the cars on red. I didn’t care what the other people were thinking of me. Eventually, I got my keeper: 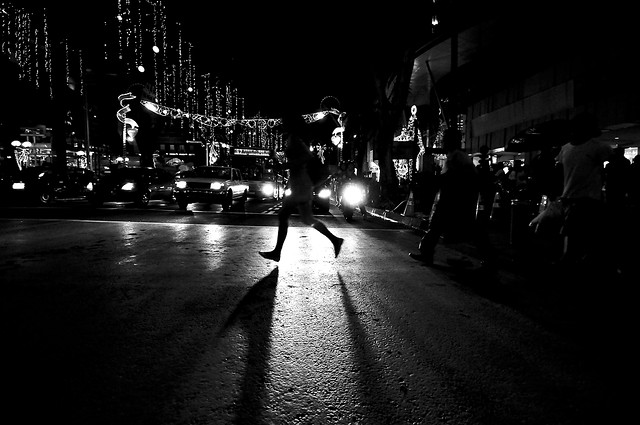 However, please don’t take this as a recommendation to just recklessly shoot anything that moves with the hopes of getting a few good ones. You have to know what kind of image you want to create first, and determine the circumstances where you can get that image, then intelligently shoot like crazy.

#4. The fear will never go away. Learn to deal with it and shoot through the fear.
I’ve been shooting for about 2 years now and I still get scared shitless most of the time. That feeling is always there that sometimes I would ask myself “why am I doing this to myself again?” The fear and paranoia will not get better… what DOES get better is your ability to consciously decide to shoot anyway despite the possibility of getting slapped in the face by the tough-looking chick you’re about to photograph: 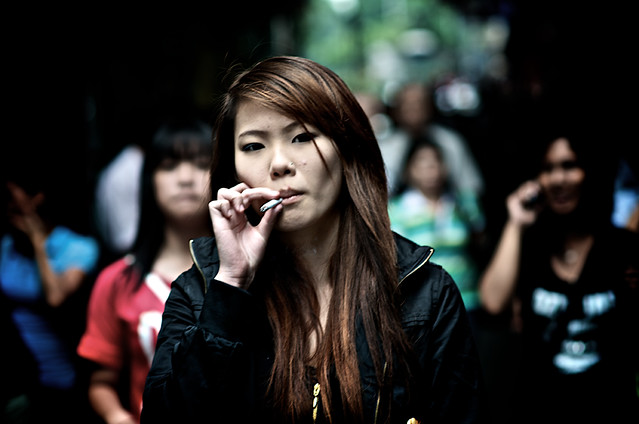 Don’t get too reckless, though. I don’t want you to get slapped and blame me for it.

#5. Relentlessly look for inspiration. The more you immerse yourself with great photos, the higher your expectations of your own photos will be.
I’ve been there… on my first few clicks from my new DSLR, I thought “that’s not bad.. that’s not bad at all.” And a few more clicks and I had the ability to create stories out of my shots to justify its existence. At this point, I can still remember my girlfriend shaking her head saying ‘no.’ Then after a while when I get to see all those other awesome street shots on Flickr, and I get back to my early stuff, I realize how embarrassingly bad I actually was.

One important trait of a photographer is that ability to effectively curate his own work. In order to do this, you need to raise your personal standards. In order to do this, expand your horizons by relentlessly looking for inspiration from the classic masters like Garry Winogrand, William Klein, Helen Levitt, Henri Cartier Bresson, Daido Moriyama, Elliott Erwitt, and Philip-Lorca Dicorcia to name a few. For modern street photography, there’s Trent Parke, Matt Stuart, David Solomons, Nick Turpin, Matt Robinson, Matt Weber, Lukas Vasilikos, Nils Jorgensen and so much more.

The more familiar you are with what a good street shot looks like, the more discerning you will be of your own shots, the better you will be at judging if you’ve got a keeper. This way, you don’t show off your mediocre work.. everyone has a lot of that. Only show the ones that make your heart leap… the ones where you can proudly attach your name to.

130 Thoughts on 5 Tips on Shooting in the Streets