One of my dream projects when I started my interest in portrait photography was to shoot different people in different parts of Singapore. It was one of those ideas that I had at the back of my mind that I wanted to eventually pursue as a personal project. Fortunately, I got to do exactly that on a commissioned shoot.

I was contacted a few months ago by Jeremy from Singtel‘s marketing department. He was wondering if I’d be interested to meet up and discuss a possible collaboration. Of course, I said yes. He presented to me his project of creating an online publication for expats here in Singapore… it was called NotaTourist.sg It was a site where expat writers could blog about their experiences in Singapore, something other potential expats could find useful in making this place their new home. They hired Pat Law / Goodstuph to be their consultant, and Ogilvy Interactive to develop the site. I remember saying “Between Pat Law and Ogilvy, I’d say you’re in good hands!” Jeremy wanted me to be one of the expat writers/contributors for the site. I said yes.

A few weeks later, Jeremy contacted me again. They wanted to commission me for a photo series involving expats completing the statement “I’m not a tourist because…” The idea was to portray each expat in a location based on their quote or favorite hang out – giving a broader picture of Singapore beyond the usual tourist spots. I was very excited with the project. After a few discussions with the guys from Singtel and Goodstuph, we’ve finalized on the concept, execution, and schedule.

One of the challenge I had was the perspective of the portraits. My past portrait work focused on the face, thus I was comfortable with close up head shots with a blurred background (like my work for BBH and McAfee). However, for this project, I had to incorporate a lot of the background to establish the relationship with the subject and the location. My beloved 85mm f1.4 workhorse of a lens was not an option. Enter my new sidekick, the Nikkor 24mm f1.4 – this baby lets me capture more of the background, and delivers a punch even in low light situations. It’s a bit pricey, but i’s a worthy investment.

Another challenge was finding a spot with good background and good light for each location. I preferred not to use strobes because it could limit our choice of locations and I didn’t want the subject to get uncomfortable… we tried to be as quick and discrete as possible. Again, my 24mm f1.4 lens came into play as it gave me more leeway with the available light conditions particularly when shooting indoors and at night.

We had 18 expats listed for the series, which meant we had to shoot in 18 different locations in a span of 2 weekends. It was like discovery weekends for me – I seriously learned a lot of non-tourist stuff about Singapore from these guys.

Photos courtesy of Pat and Daphne

Below are some of the portraits I’ve taken for the project: 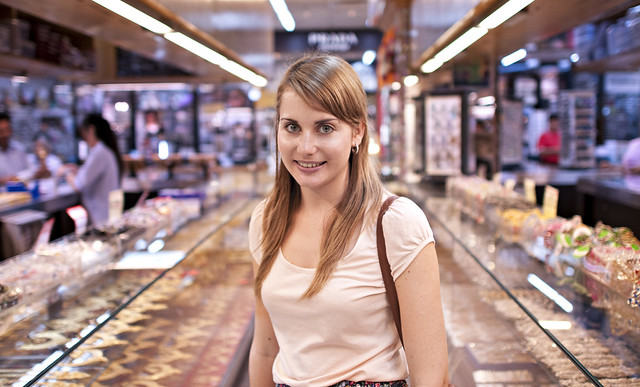 Bec moved here with her husband from Australia early this year. She says “I’m not a Tourist because I know where to get the greatest bargains at any time of the day.” Mustafa is a huge 24-hour mall located in Little India. You can buy just about everything from the place – from shoes, spices, electronics, jewelry… everything. 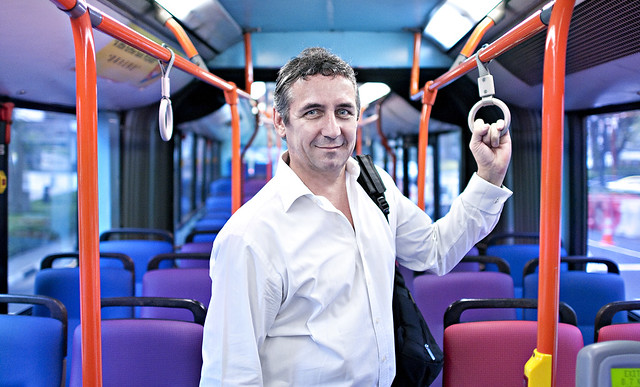 Fritz is from the Netherlands, and he says “I’m not a tourist because I take the bus to work everyday.” The original plan was to photograph him at the bus stop. But then I figured “I want to shoot him in the bus.” So we went to a random bus stop, waited for an empty bus, hopped in, and started shooting… while in transit :) 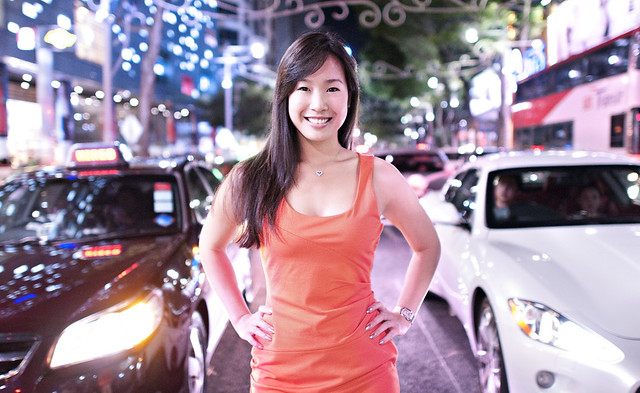 Victoria is the editor of NotaTourist.sg and hails from New York. Her quote was “I’m not a tourist because I have the taxi booking app for those mysterious times when cabs disappear until just before midnight.” I photographed her literally right in the middle of Orchard Road on the pedestrian crossing while the green man was on. We should have asked her not to wear heels coz we were running for the sidewalk each time the green man turned red. 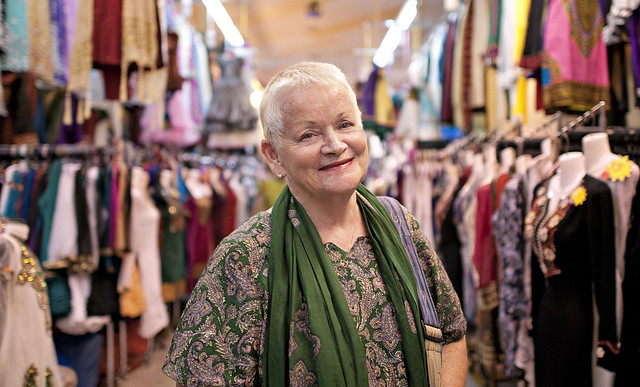 Leone is from Australia and has been here with her husband for 4 years. It’s funny that she’s more familiar with the MRT routes than some of the locals. Her quote is “I shop local. I eat local and live local. I even tailor-make my clothes local.” Yup, she had 24 complete outfits and a few tops through Sai’s Tailoring at Tekka Market in Little India. 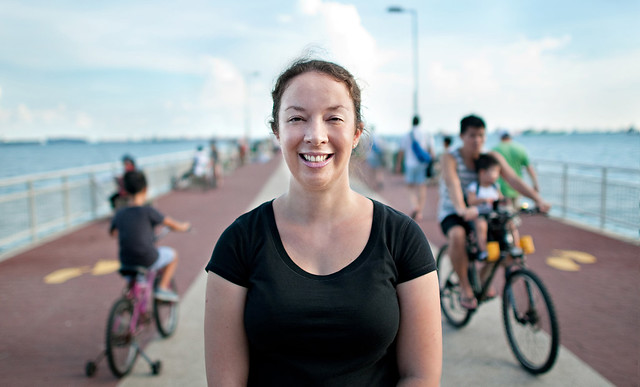 Laura moved here from the UK last year. Her quote was “I’m not a tourist because I know there’s more to the city than Orchard Road and the quays.” As much as I love Orchard, she’s right. One of her favorite places to relax is East Coast Park. 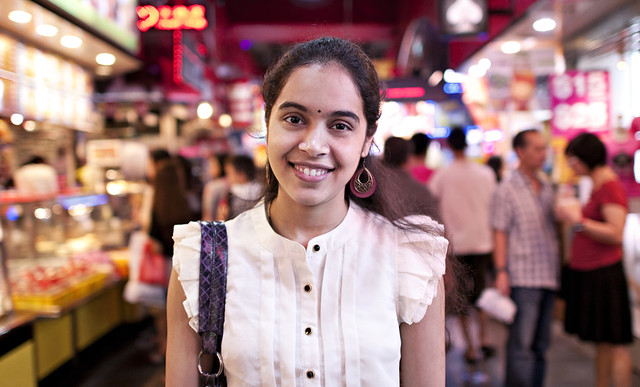 Chaithra hails from Bangalore, India and just recently married. She says “… we have unknowingly started speaking Singlish sometimes. Can, cannot, lah, already is a part of our dictionary now.” She and her husband like’s to hang around Bugis. We took this photo at the usually-crowded Bugis Street, the “largest street-shopping location in Singapore.” 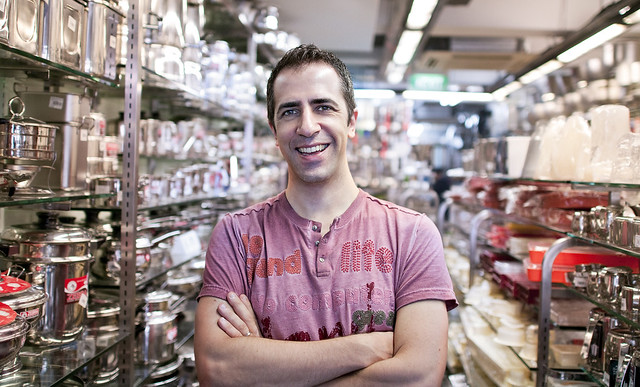 Antonio is an Italian moved here in 2006. He’s a software programmer by day and a food blogger by night. He also has a passion for cooking, that’s why his quote is “I buy my kitchen utensils at Sia Huat.” It’s a store in Chinatown where you can probably but anything and everything you’ll need in the kitchen. 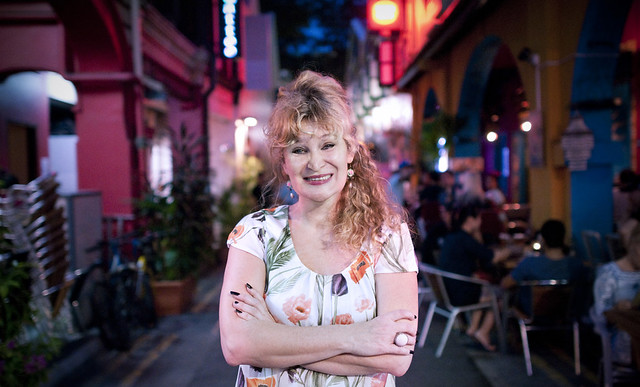 Anja is a Dutch who loves dancing, teaching, and DJing argentine tango. She has an inkling towards all things creative and loves to “… hang out where the locals hang out, with my bff, who is also a local.” Her photo was taken beside Piedra Negra in Haji Lane. 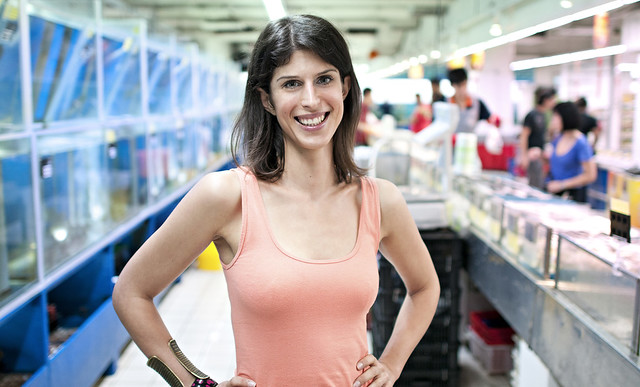 Talya is a very active and bubbly gal from London and has been here for a year and a half now. She says “I’m not a tourist because I shop for groceries at Sheng Siong.” One of the things that’s very distinctive of Sheng Siong is it’s seafood section – the fish is so fresh, you actually get it straight from the aquarium. I remember seeing the shrimps laid on ice still squirming… and I pointed at it wide-eyed saying “it’s still squirming.” 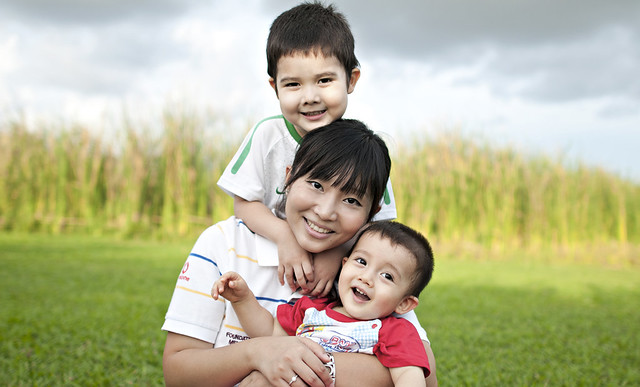 Sammi is from China but lives here with her husband (Aussie Pete). She says “I’m not a tourist because I gave birth to both our boys locally here in Singapore.” Their boys are going to be future heart breakers… and as always, not the easiest photography subjects. Out of the almost 100 photos I took, only 2 photos resulted to the both of them smiling at the same time :)

At the launch event of NotaTourist.sg held at TAB, I was surprised to see the photos printed out large and lined up at the entrance for all the guests to see. My girlfriend told me “… it’s like your own personal gallery!” It was pretty surreal. Of course it didn’t last coz after the event, they let the expats take home their poster-sized portraits :) I got to meet again most of the expats I photographed, and it was a blast. 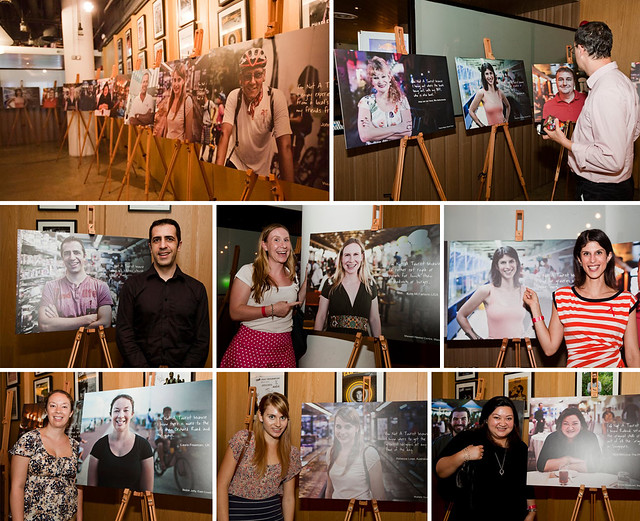 Photos from the launch event taken by Benny Loy

Big big thanks to the marketing guys at Singtel: Jeremy, Kenn, and Pei Ni.. you guys are awesome! And to the girls at GOODSTUPH… Pat and Daphne, you guys are beyond cool.

And of course, bigger thanks to the expats: Antonio, Chaithra, Naveen, Fritz, Anja, Bec, Kate, Talya, Laura, Matthew, Myra, Leone, John, Peter, Sammi, Flora, Jeff, and Victoria… you guys were so easy to photograph. Thank you!